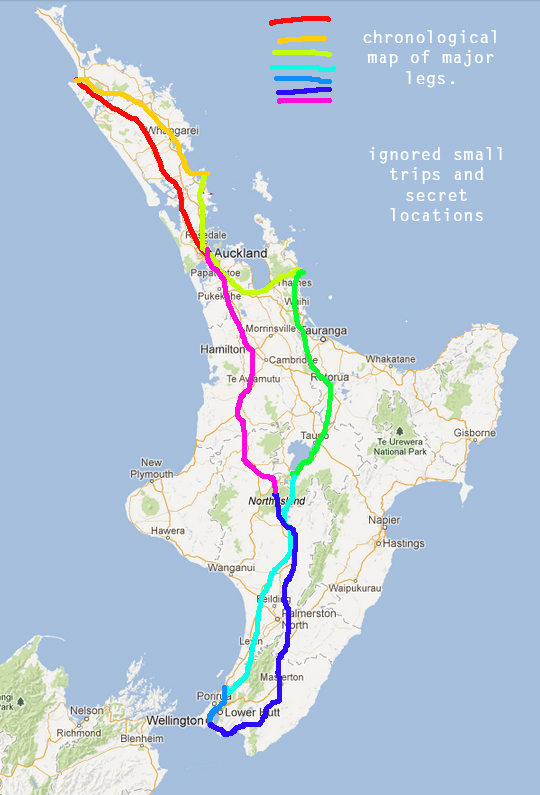 after a whirlwind of business furthering my luck and enjoyment for this life i’ve now landed back into the, now comfortable, routine of life at home.  The almost 3 weeks that I spent in New Zealand, which ended yesterday with an icing based flight home, amounted to bulk process towards my stoke bank.   The trip, which i’ll blog about over time, was a huge success.  No crashes of major destruction, only a handful of rain-drops, which fell whilst we mobbed through a Northland forest, resulting in bulk wig. 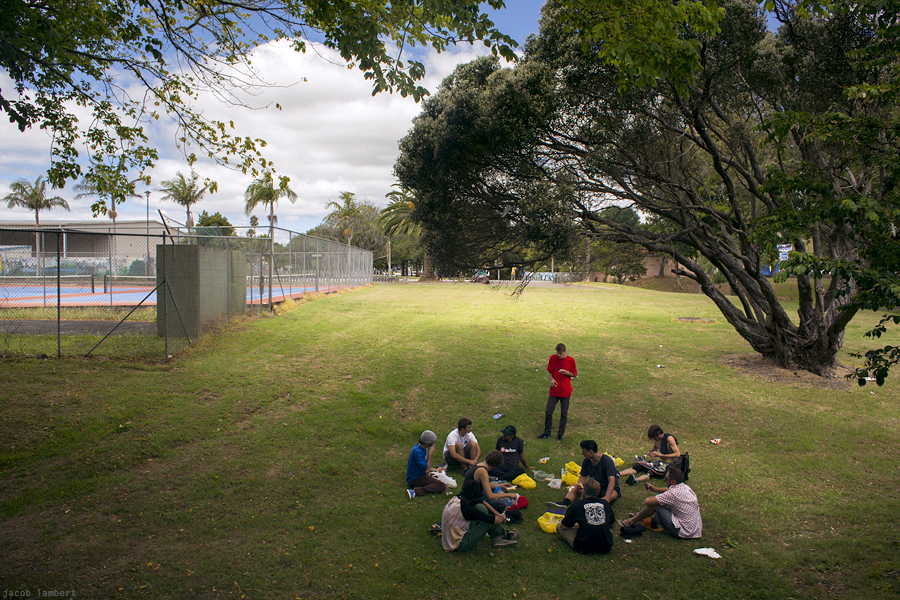 We covered a huge amount of New Zealand’s North Island, starting (and ending in) Auckland, we first headed to the very northern tip.   Destination 1 was a little bit silly.  It was a fern riddled dream forest of buttery caf bitumen where eagles swooped down and consumed possum roadkill.  The hill was also ridiculously good to skate, my favourite hill of the trip and i just want to do it over and over and over etc.  I just cant believe its not real butter, a real crisis, thankfully there was a pak’n’save nearby.  There was a serious situation involving an all-day breakfast mentality and toasted muesli and drinking yoghurt.  For example, I ate 1 kilo of muesli in 2.5 days with 2L of yoghurt and 6 nanas.  Epoch.  We stayed on the west coast on a 90 mile beach.* 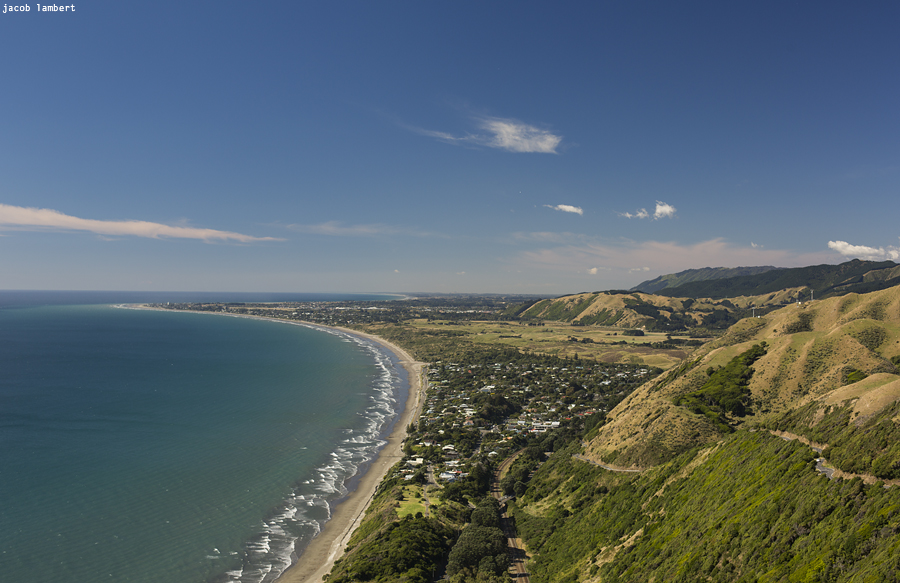 an overnight stop near wellington, hills included.
traversing the east side we lurked the coast until we landed next to a solid freeride park (i say park because its a private road with no owners, butter-caf surface for skiddies and a locked gate, we chummed the neighbours as to let us through their backyard into the aforementioned paradise) From there we continued southwards until we were latitudinally realigned with Auckland, at which point we returned to Auckland (in order to return Api so that he could get his broken ankle fixed after 2 years of dealing with it, unfortunately upon heading home to the southland and arriving at the hospital he was turned away due to chances of infection attributable to road rash/stitches [obtained whilst on the trip] so he ended up getting back on the tour a few days later, there was much stoke upon reuniting.) 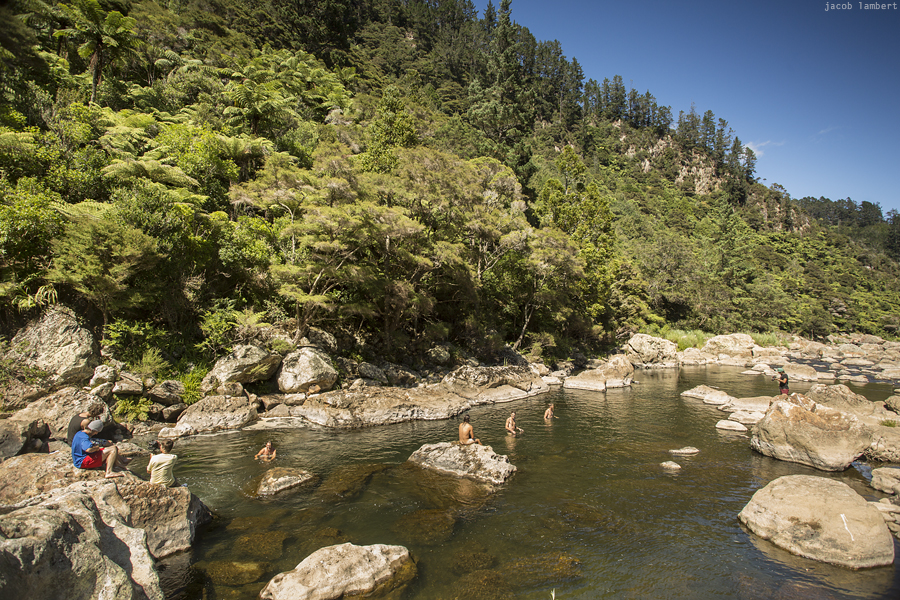 tranqin deep, down the road from the Electronic Chicken.
Returning to the recount, from our second time in Awksland we then ventured south and then east to the Corramandels which hailed more stoke, beautiful landscapes and more worldclass hills (with names such as Electronic Chicken and Pumpkin Pit, it’s obvious that they’re rad…..?) 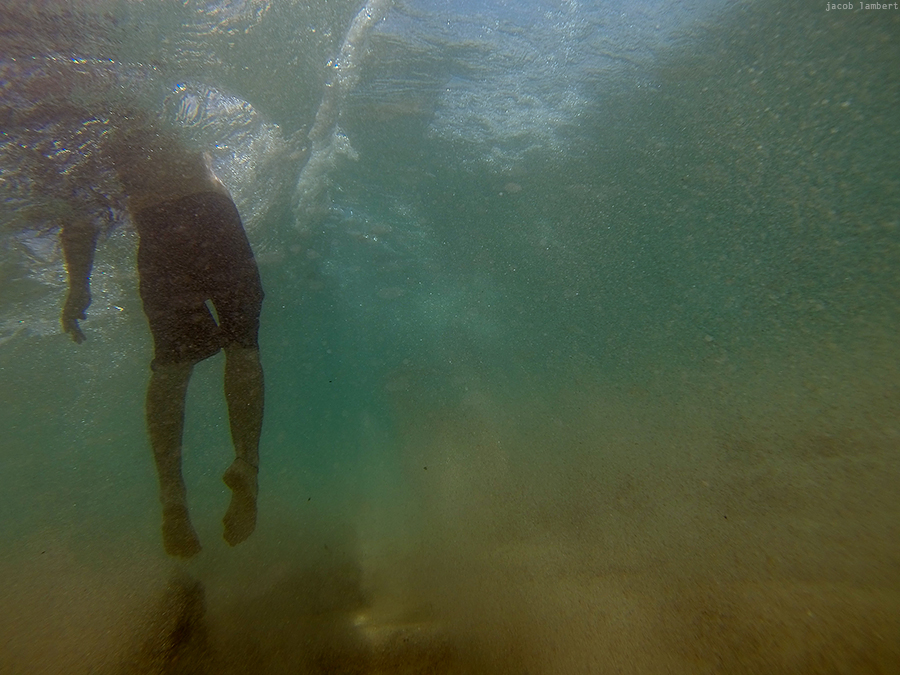 wishing we were getting shacked at Pakiri
From there we ventured southwards to a relatively large lake and lurked it for the evening before heading down to Paekokariki, which is right next to Wellingon.  This was the longest leg, it took us 2 days but we were in no rush, we generally moved slowly but never missed out on anything, it was planned well and executed almost as well, the middle days saw some restlessness as we skated only parks and drove big legs.   Paekokariki was a nice end to the drive, we skated this daunting cliff road with some super gnarly sections but relaxed with some park time, ultimate frisbee and the beach.  The water throughout te northland was ideal, it was really cold but super pleasant, I love cold water unless im trying to catch waves in it without a suitable suit. 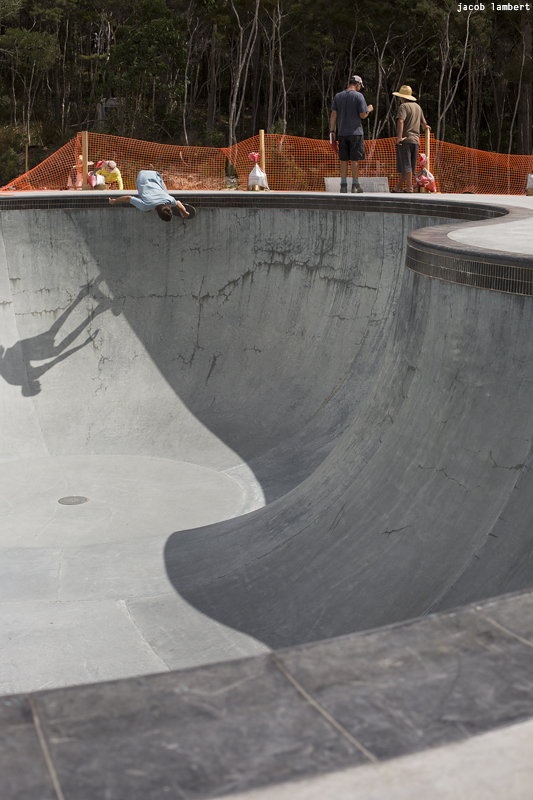 Matt K tempted by pool coping, 18 feet up.  he hit it, i kept the photo.
Wellington was the next stop and it BLEW MY MIND.  It’s like LA in the sense there is and plethora of canyon runs except add on multitudinous city runs and subtract everything that sucks about LA (almost everything) and you’ve got Wellington.  I want to live there once in my life, adding to the list of 1 (Innsbruck.)  We spent a few days in Wellington, enjoying civilisation while we could as from there we headed to the moon. 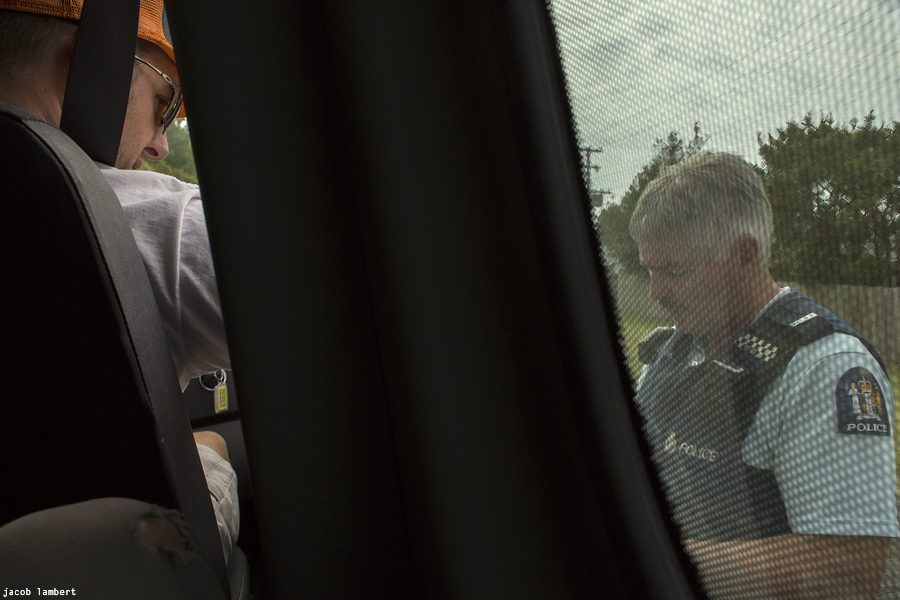 po-po saying no-no by making up laws and threatening us with arrest.  Downhill skating on roads is 100% legal in NZ, so long as you don’t break the speed limit but the police tend to enforce their own rules, I’m a bit bitter.
The moon = Mt Ruapehu, or Rape-you as anyone thats ever tried to skate it affectionately dubs it.  It’s claimed many a body and demands respect but will offer and endless amount of glory.  It was the last stop of the trip and definitely my favourite.  We had our own Chalet at the top (normally a ski resort town that is left 99% deserted during the summer) that was skate in skate out….  It was novelty, like oh my lawdy I still can’t even deal.  My morning would be feast on muesli and toast, skateboard out the door onto 6 minutes of world-class downhill with 10 epic dudes, get to the bottom, re-enter van mode, get to the top and then decide wether to keep skating or eat, chill or do anything because nothing mattered, i’ve never felt so free even though objectively i was not at all free.    We each clocked up around 90kms of downhill riding on Ruapehu alone…. 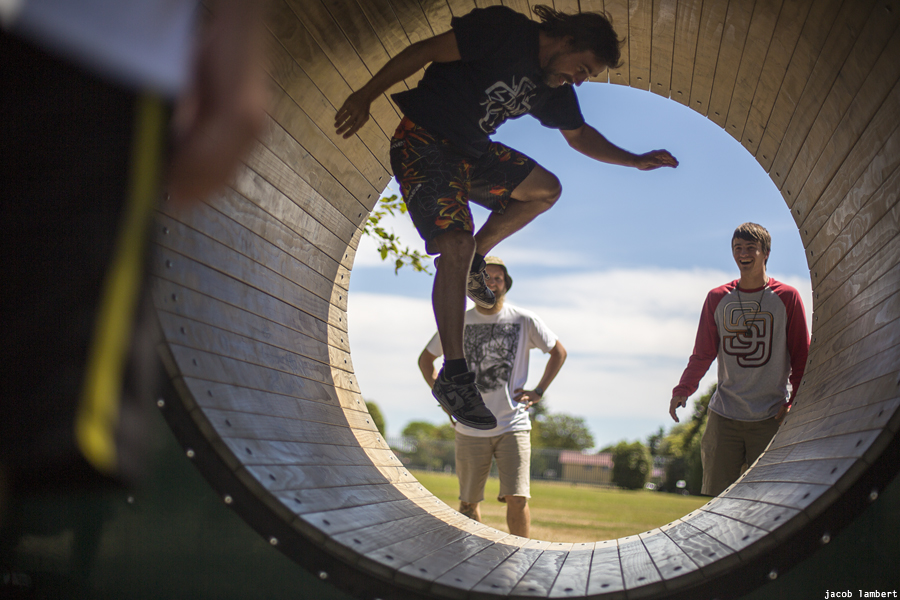 regulation lurking
from there we went back to auckland, i spent a night and bailed home early in the morning due to broke-ness and the need to save money before Japan/Bali at the end of this month, ektos!   Although I like making photos and it was why I was on the trip I didnt shoot many photos.  I skated a ton and filmed some stuff but took a much less trigger-happy approach to it all and it all ended up well.  I was a little concerned because although I was in NZ i wouldn’t have much sway in terms of taking us off-course in order to take pretty photos.
Me and Bobby sharing our last run of the trip. 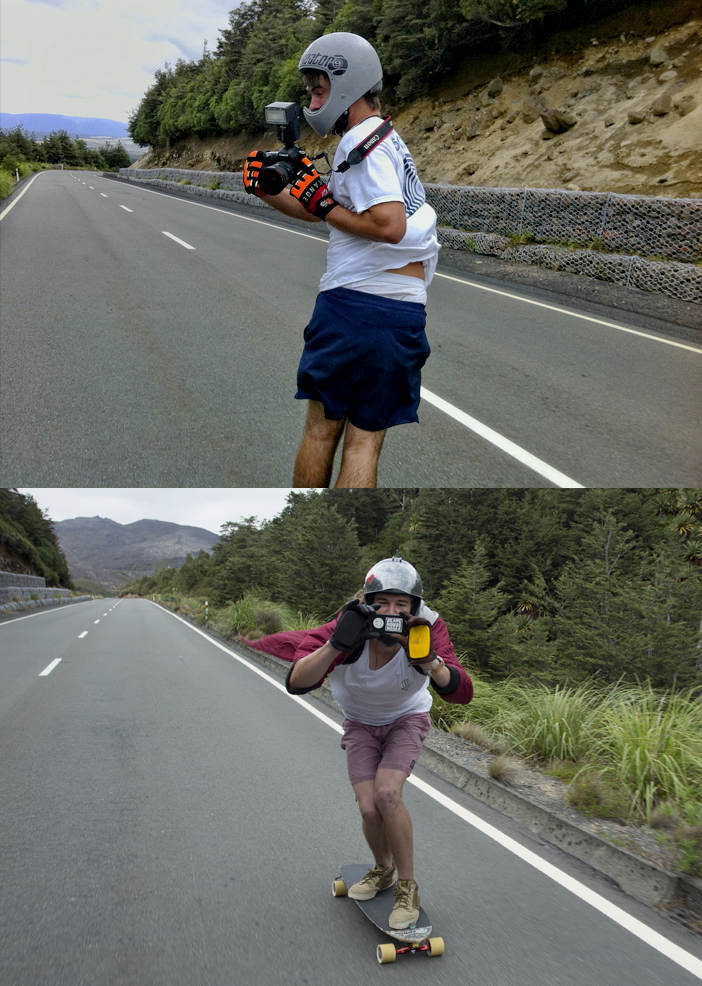